Menu
Data Summary – Why I’m Betting Against The Markets & Recession Warnings Ahead For 2022/2023
Equities & housing display key bearish forms and the economic data is compounding with recession warnings to produce dire forecasts for the years ahead. 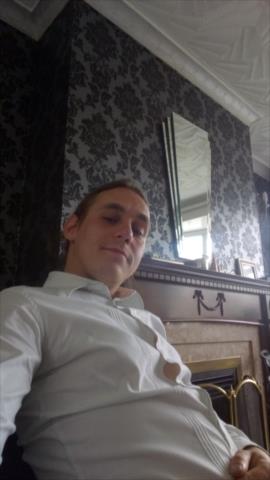 I intend this article to be a summary of thoughts going into what I believe may be a pretty baked-in recession. This article will be updated regularly even if the markets do get away with it in the end.

It’s always tempting, in any sort of field, to become a one-trick pony and just stick to any sort of line without any reasoning and without recognising that things always change.

I’ve been there and made this mistake quite a few times but ultimately, my own successes have always come precisely from my abilities to do volte-face when the needs of a particular situation command it.

Markets are also notoriously difficult to time (in fact, most professionals will advise people against trying this) and, especially if you’re just used to following an abstract trend, you probably won’t be looking at broader statistics or data.

Full disclosure: I trade derivative and I have real money committed. I generally trade instruments which can guarantee minimal taxation liabilities and I commit my own funds and money. I trade in dollars but I’m a Brit and therefore you will sometimes see assets denominated in £ as well as $. My instrument of choice is the VIX (Volatility Index).

To explain this point, we will look at the NASDAQ100 ETF during the Dotcom bust during 2001 when the stock markets collapsed due to an overexposure to shaky tech companies. 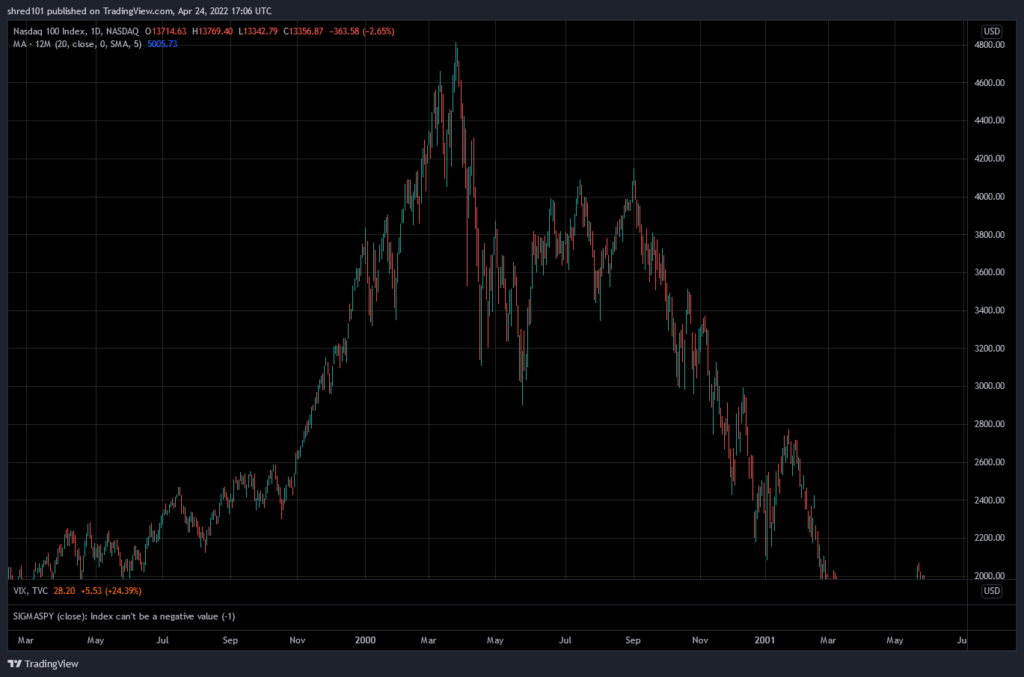 Don’t worry if you can’t read candlestick charts or you’re not sure of the significance of this form at this point. Simply focus on the shape which the line forms on the chart. 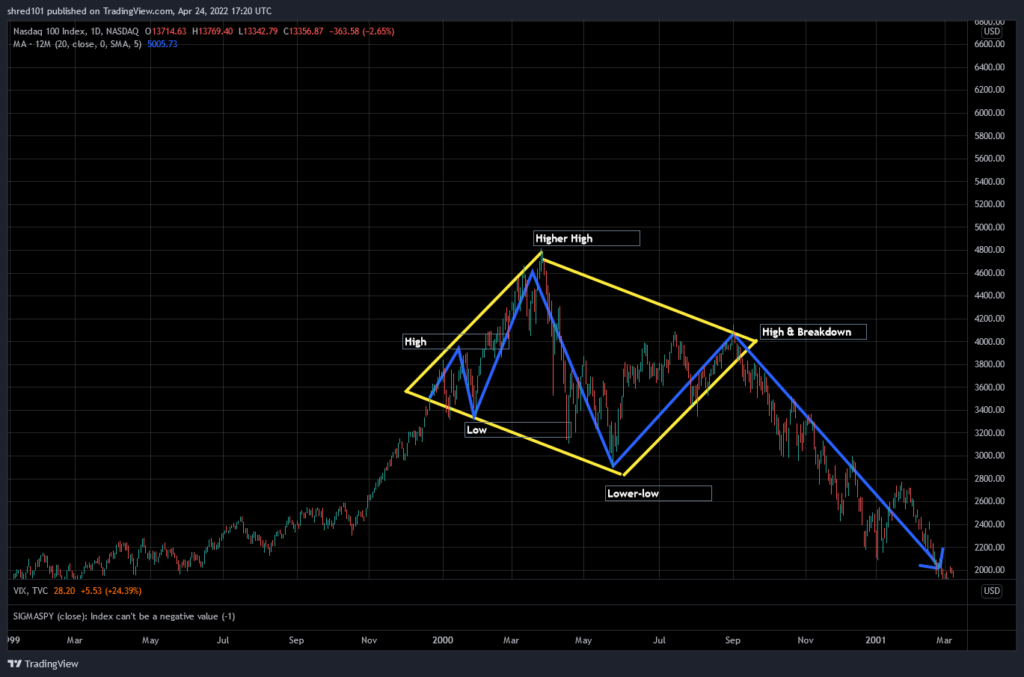 We can see that this forms a rough diamond pattern which is a key reversal pattern.

In this form, we see it in the “bearish configuration” and thus, this is known as the “bearish diamond” chart pattern.

The reason this is interesting, is because we currently have the same form on the S&P500 which is possibly the most important index of large US companies. 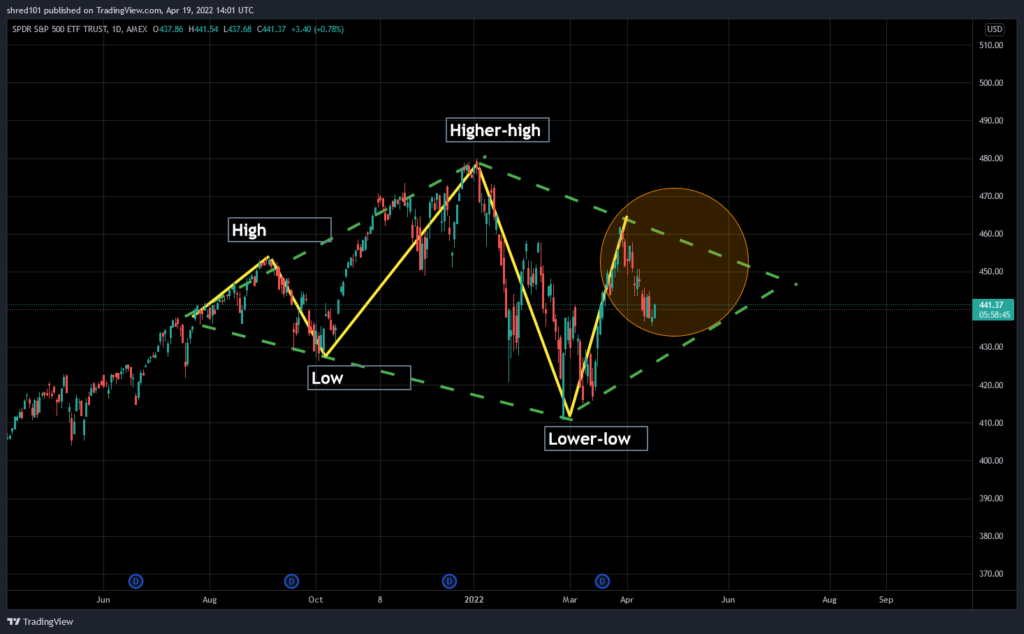 We can see that all the key parts of this form are in place.

Lets make a direct comparison between the two charts. 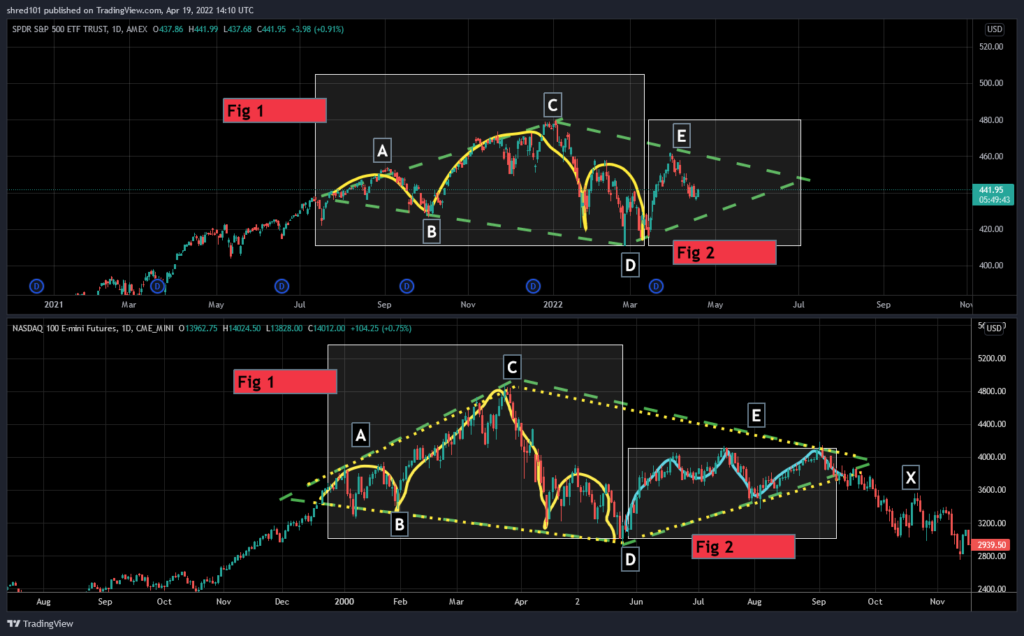 We can see that all of the components of the Bearish Diamond are in place.

The only way markets could invalidate this form is by breaking through the top-line of the diamond and, the key question we have to ask here is:

Can we really expect new all-time highs from equities with everything going on in the world?

Hence I am sceptical that this form will be invalidated by another rally.

Inflation Is Showing Similar Signals To The 2008 Recession

I generally take the view that there is very little which has never been seen before.

In fact, I believe that history tends to move in cycles. Or, more specifically, fractals.

An interesting form I noticed upon the US inflation chart can be viewed in the following chart. 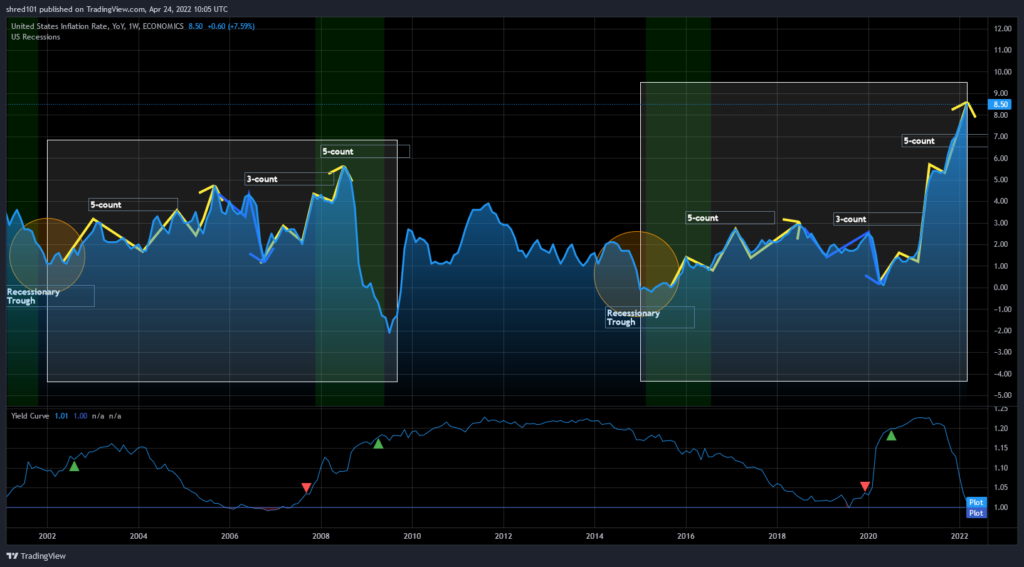 We can see on this chart that a very similar signature exists in the modern 2015-present period to that which occured between 2000 and 2008.

Of particular interest, is this  shape: 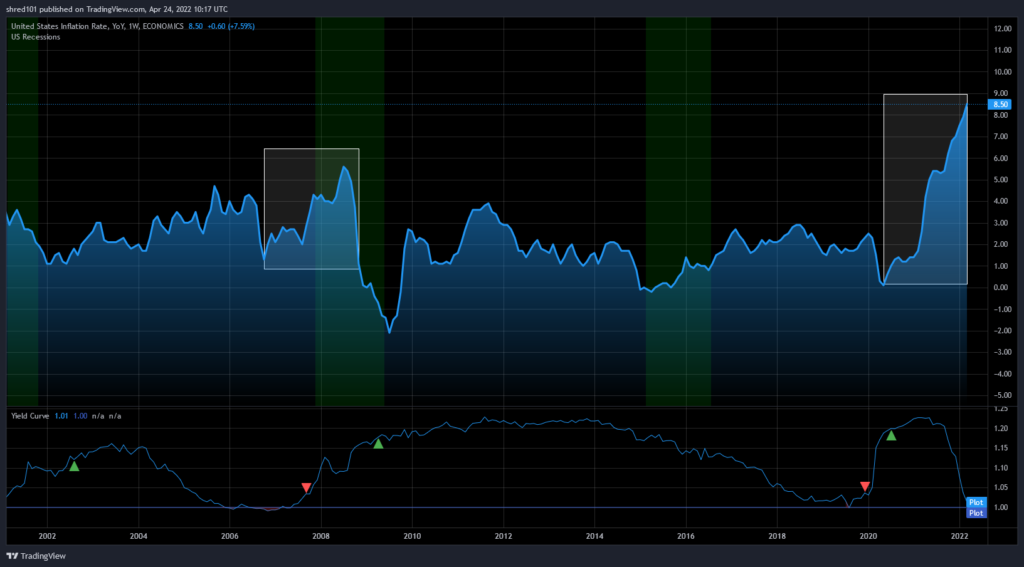 I know that there is a panic about inflation at the moment and naturallly of course, this is being driven by a few factors (some of which we’ll examine) but, the key fact is that a 2008-style deflationary shockwave would be far worse than just high inflation.

This means that deflation is peaking which should be a bullish factor for bonds and other inflation-sensitive assets.

The FED Is Cornered & Becoming Aggressive 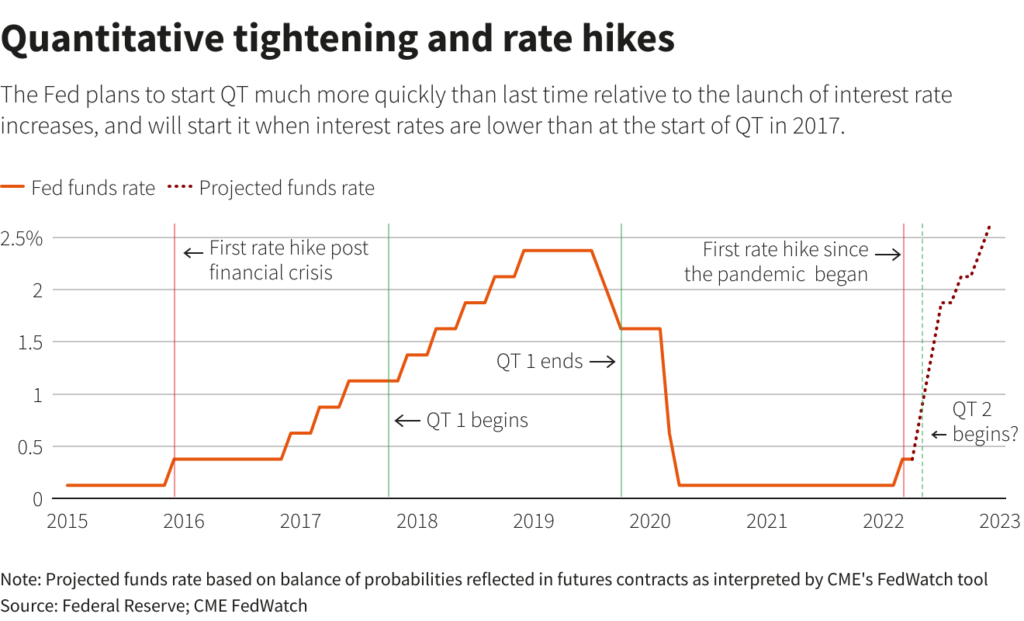 This chart from Reuters outlines the plans of the Federal Reserve.

In short, they are going to attempt to push interest rates past the 2.5% mark over a 1 year period.

This pace is four times more aggressive than the last tightening cycle which began in late 2015 (and was abandoned in 2019).

We should remember that, on top of this, the FED has recently concluded ending Quantitative Easing (as of March 2022).

Why does this matter?
Well, because in short, the market is very dependent on an easy-money Federal Reserve regime.
Hence, traditionally, when the FED has tried to taper QE (which has recently concluded) and raise interest rates, the market has panicked.
We saw serious crevasses (sudden downturns) during the last tightening regime from 2016-2020. We must also look at the now infamous “taper tantrum” in 2013 when markets sold-off by about 5.5% in a very short space of time purely because the FED had discussed ending QE and raising interest rates.
However, a key distinction here within this cycle, is that the FED is recording inflation above 8.5%
The FED has a responsibility under it’s charter to keep inflation at 2%.
As such, if we can assume that fiscal tightening will crash the markets, we can see that the FED may not have any choice but to crash the markets in order to bring inflation under control.
This means the FED is cornered and is likely to take aggressive action as a result.

Consumer confidence Is In the Tank 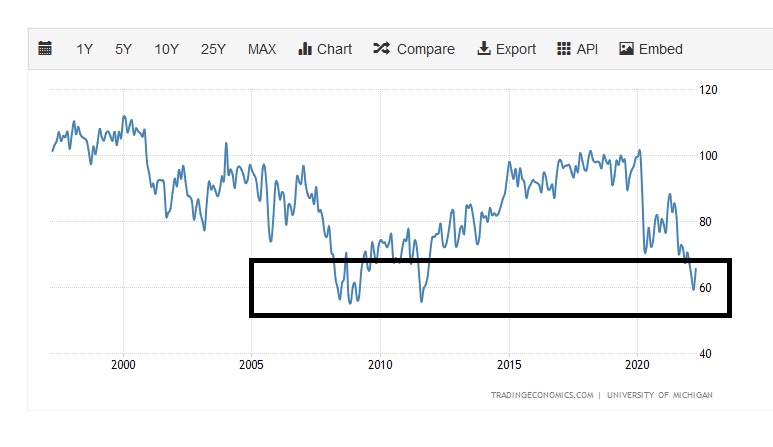 US onsumer confidence is seeing lows that we have not seen since the credit crunch.

This is partially being driven by inflation and the cost-of-living crisis and naturally has serious knock-on effects for certain companies which provide goods and services that consumers can sacrifice or substitute in order to save money.

Thus, sooner or later, my logic is that this must feed through into speculative assets.

Especially consider that inflation is already clocking-in at 8.5% and that if we end up with a panic due to the FED’s actions, this could slide further.

If we look at the chart in the image below, we can see that during a recession, major stock indexes are usually one of the last factors to respond.

During 2008, the majority of the consumer confidence panic took place *before* the stock market was routed.

So of course, we can ask “aren’t you a little late to the party Dean?”

Well, no. Because historically, stock prices are very detached from the real economy and therefore, are one of the last factors to respond to a recession. 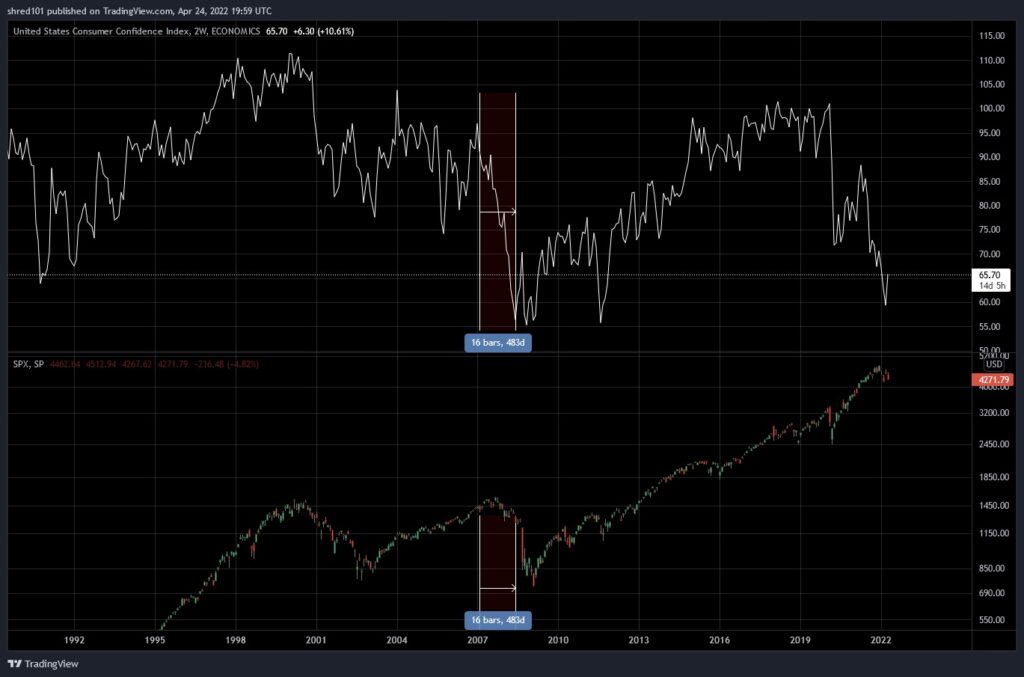 Traditionally, I take the view that, in a real liquidity panic, we end up with a situation where we have an ever shrinking pool of capital with an ever shrinking list of what is considered “safe” in equity markets.

This means that small-cap stocks get taken-out first so that investors can re-allocate the assets into medium-caps which are considered “safer”. Then of course the crisis hits medium-caps and so investors re-allocate into big-caps that are considered to be safer and then after that of course the crisis envelopes the entire market and they end up trying to exit from the likes of Lehman Brothers and have nowhere to run to except hard-assets and cash.

This is a pretty good description of how a liquidity problem destroys equities.

Right now, we have a situation where speculative equities are already in the middle of a historic rout.

The ARKK innovation ETF which tracks companies like ROKU is already down by a huge amount. 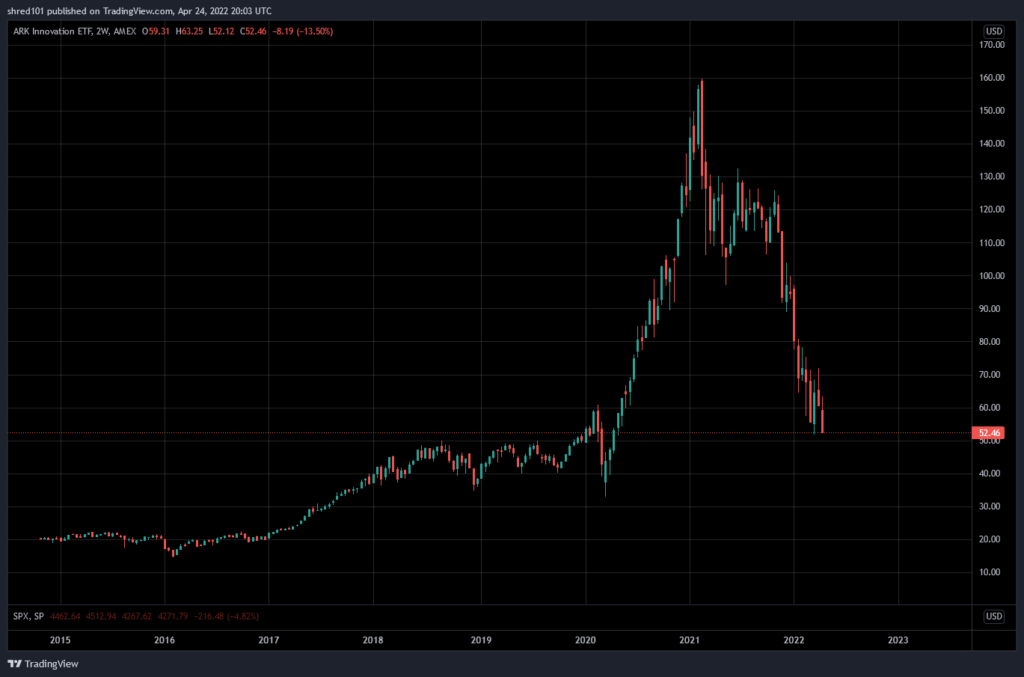 As such, I consider this the early stages of a liquidity panic which involves investors trying to flee through a percieved series of incrementally safer options.

Until of course, the last “safe options” are hard assets and cash.

DXY (The dollar index) Is Rallying

One of the primary criticisms of DXY is that a large amount of its weighting is made up of euros.

However, this is not insignificant because it still shows the amount of demand for dollars vs. competitor currencies.

The dollar has held its ground for many years despite the odd dip. This is because, despite what people think, fiscal conditions are actually very tight.

In fact the FED knows that they have no choice but to drive up the purchasing power of the dollar to fresh 20 year highs in order to offset inflation. 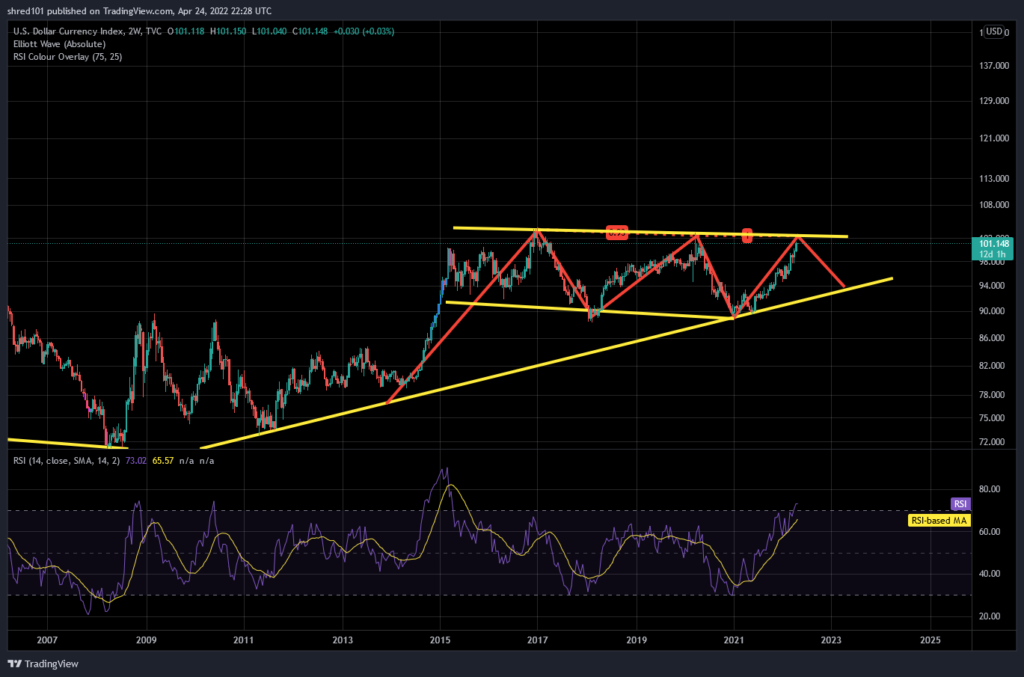 We can see in this chart that the dollar index is forming a key bullish chart pattern known as a “bull flag”.
This means the dollar will move higher putting developing market currencies into serious danger and also putting pressure upon debtors who borrow in dollars.
The underlying tightness of fiscal conditions and the prospects of further tightening of fiscal conditions is driving this rally.
Speculators are also moving into the dollar and this stands a chance of initiating what I like to call a “negative liquidity feedback loop”.
This is a simple concept:

The FED knows about the dangers of this, however, it considers it a less-worse evil than allowing inflation to get out of control.

This poses a risk to assets markets however, because obviously a stronger dollar will make assets cheaper.

Public Sentiment On The Economy & Markets Is Clearly Eroding

Many search terms on Google which are bearish in sentiment are displaying a strong influx of searches from people who are looking for information about the economy.

This suggests that consumer & investor sentiment has been rattled. 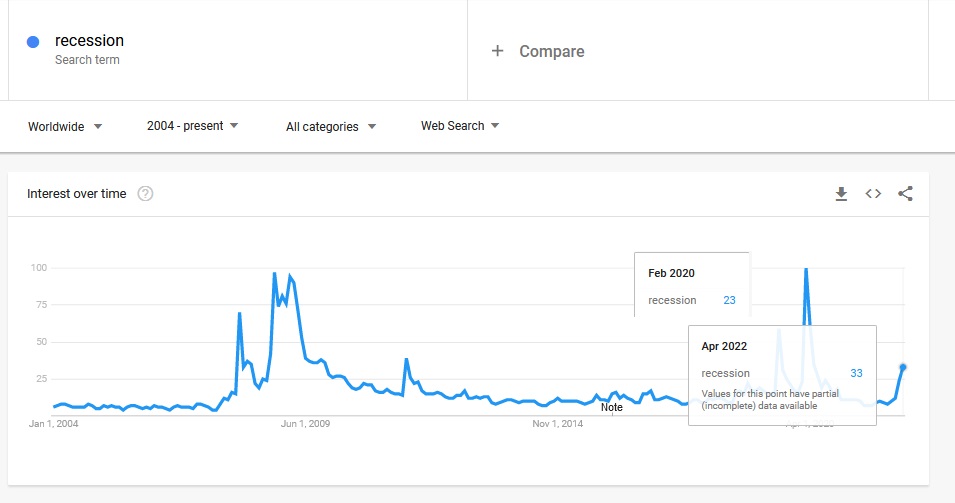 We can see in the chart above that searches for “recession” are at a higher level now than they were in the lead-up to the Coronavirus crisis in February of 2020 (and are still accumulating).

Meanwhile, the number of searches for “housing crash” has set a new record by a substantial margin. 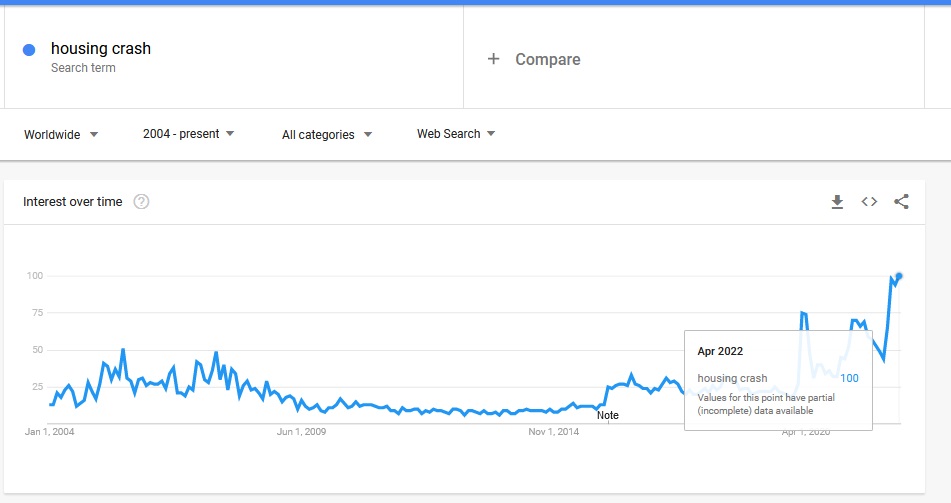 This is very significant because this metric has now exceeded it’s COVID-19 era highs and far exceeds the search volume witnessed during the collapse of the housing bubble.

Households Are Super-exposed To The Equity Market

According to Zillow Research, the value of all housing stock in the USA is $43.4trillion.

This is a worrying enough statistic in itself and raises a number of questions.

However, that number is interesting because the value of all US stocks held by US households represents around 25% of all household assets.

This is the highest figure in history.

This raises questions about equity market contagion spreading to the housing market. 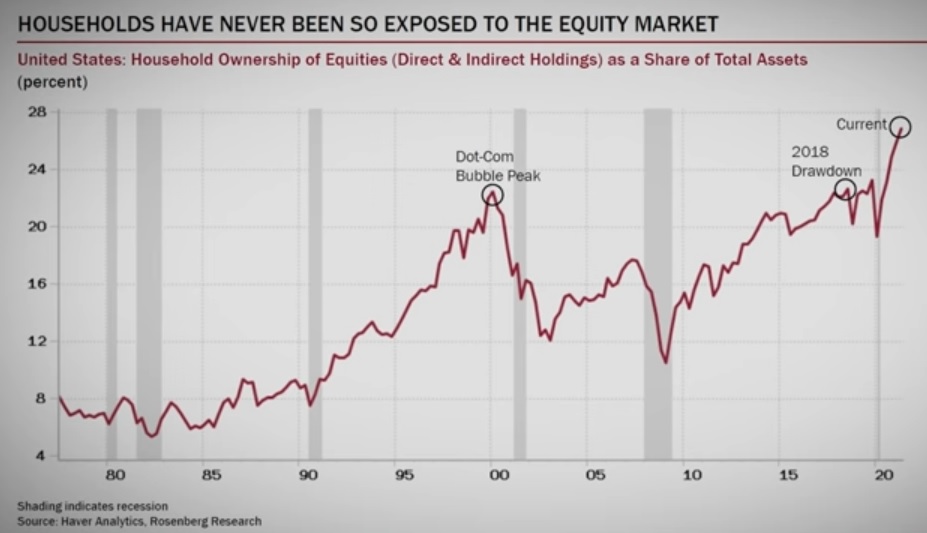 Yields Are Rising & Breaking-Out Of Their Long Term Downtrend

We think of interest rates as being something which the FED has a decent level of control over.

This isn’t really true however.

Yes the FED does control the core interest rates on deposits (and this has secondary effects upon the broader banking sector and public and private debt). However, I believe the truly important interest rates are market-led. The most important being bond yields.

So even though the FED has only just begin to raise interest rates, the private sector and the markets have been raising interest rates for a full year.

For those who are tempted to believe this is just about the USA… no… it isn’t.

As we can see, government debt yields are also surging in the Eurozone. 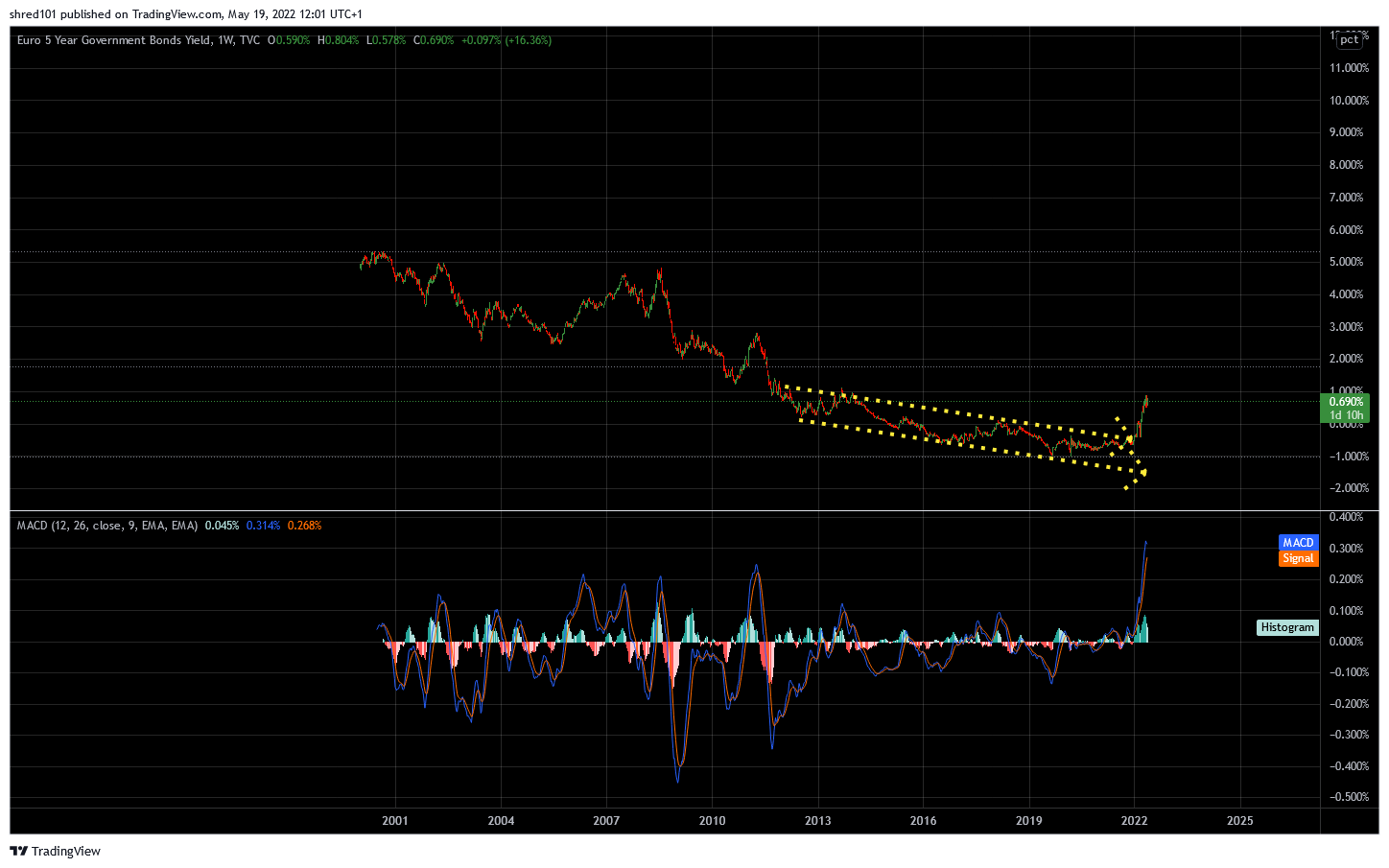 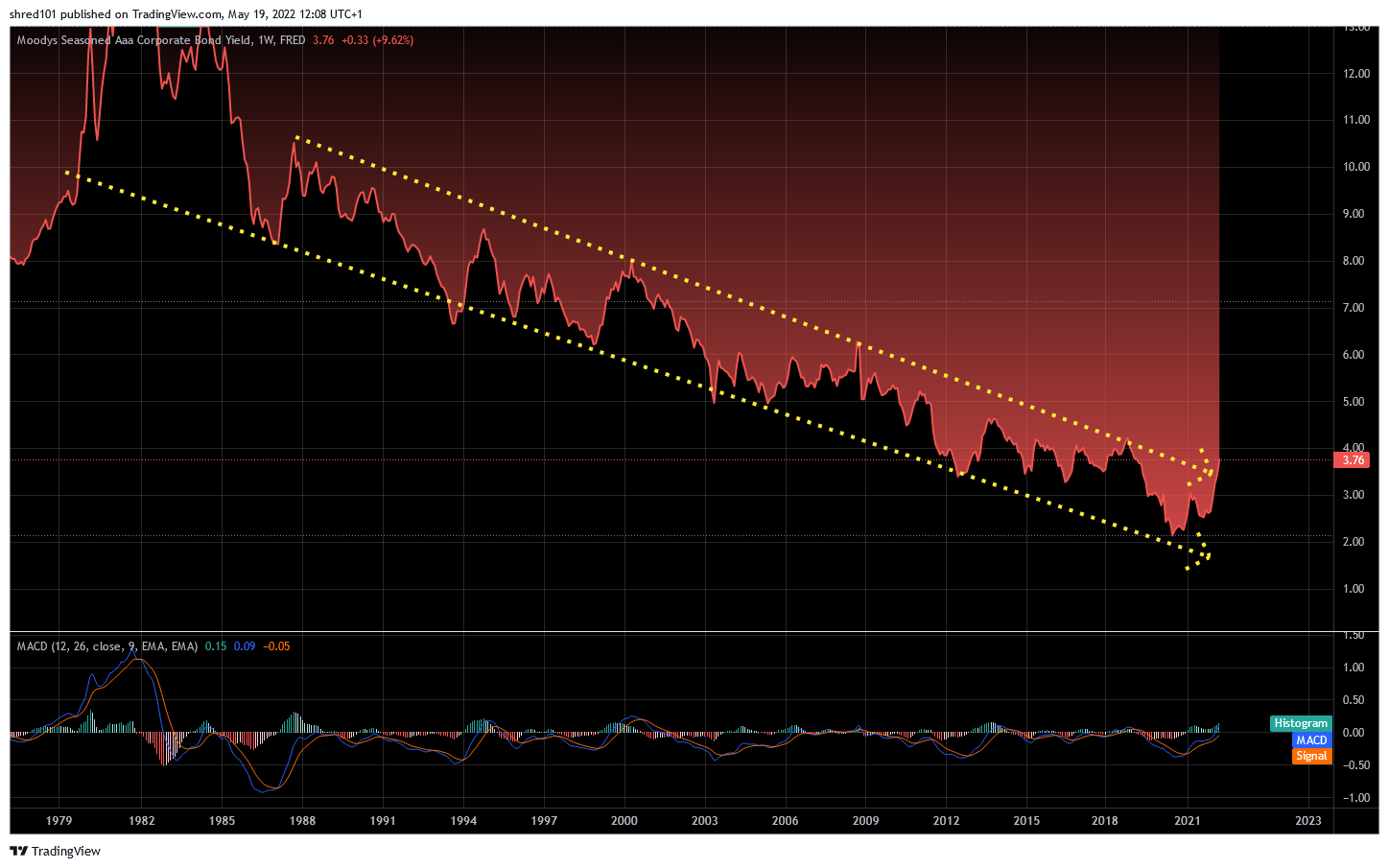 The reason this is important is because this means that fiscal tightening is already here.

While everyone is watching the Federal Reserve for it’s interest rates increases, the private sector is already pushing-up interest rates through simple market mechanics.

The fact that we’re breaking out of the long-term downtrend on yields before the Federal Reserve has even started to raise Fed Funds rates suggests that there could be a very high ceiling on private and government debt.

As we can see from this chart the S&P500 is down essentially a full 20% since the new year. 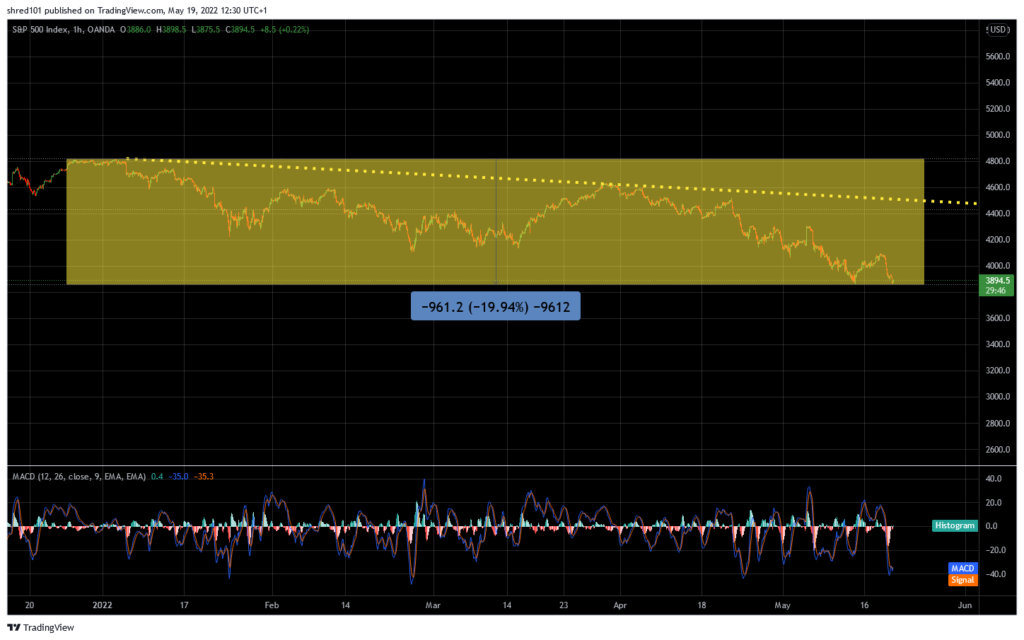 However tempting it might be to think that this panic is a 2000 or 2008 style dump, the fact is that this is largely asset managers who are selling their stock.